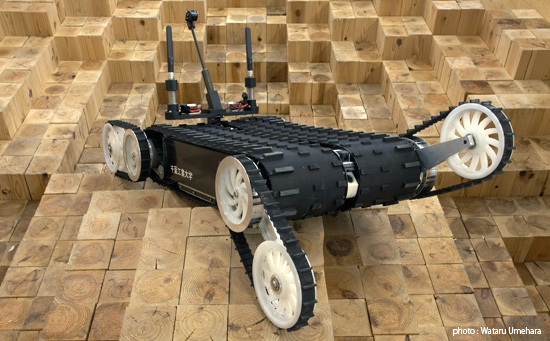 Quince is a rescue robot designed for CBRNE disasters  situations involving Chemical, Biological, Radiological, Nuclear, and Explosive hazards. It was developed to perform on-site surveys on behalf of humans, such as fire-fighters. Hypothetical disasters include accidents at plants handling toxic substances, leaks of hazardous chemicals from chemical plants, explosions, and acts of terror like the notorious subway sarin incident. Risks are particularly high in enclosed spaces (underground and inside buildings), and expectations are high for robots as they will protect officers from secondary disasters.
Quince surveyed the inside of the Fukushima Daiichi nuclear power plant whose damages were caused by the East Japan Earthquake on March 11, 2011. Quince, with modifications for operations at nuclear power plants, has photographed the details of the buildings of the power plant, created radiation dose maps, and sampled radioactive materials floating in the air. It has been helping to reduce the radiation dose of on-site workers and to shorten the work period.

- LSI plants contamination probe caused by seismic disaster
- Chemical plants probe of leakage chemicals and its explosion
- Probe to regions influenced by the terrorist attacks like Tokyo subway sarin attack
* Robots like "Quince" are highly expected especially in confined spaces like the basements and buildings to prevent firefighters from becoming involved secondary disasters.