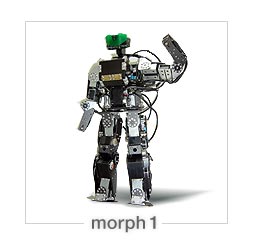 Conventional humanoid motion control studies have focused on ambulatory movement. As humanoid development moves into the stage of practical applications, however, what become essential are technologies pertaining to the safety of nearby people, the robot's environment and the robot itself when executing such operations as fall avoidance and recovery from a passive fall. It was against this background that the morph development project was undertaken.

The morph project began in April 2001 within the ERATO Kitano Symbiotic Systems Project with the R&D objectives of humanoid elemental and integrative technologies and autonomous systems involved in full-body motion.

Construction of the first- and second-generation experimental platforms morph 1 and morph 2 was completed in May and September 2001, respectively. As used here, the term full-body motion refers to motion entailing physical contact or interference with the robot body other than the soles of its feet by flooring or other environment, such as passive and forward roll operations.

morph 1 and morph 2 are robots developed in the ERATO Kitano Symbiotic Systems Project of the Japan Science and Technology Agency (JST).