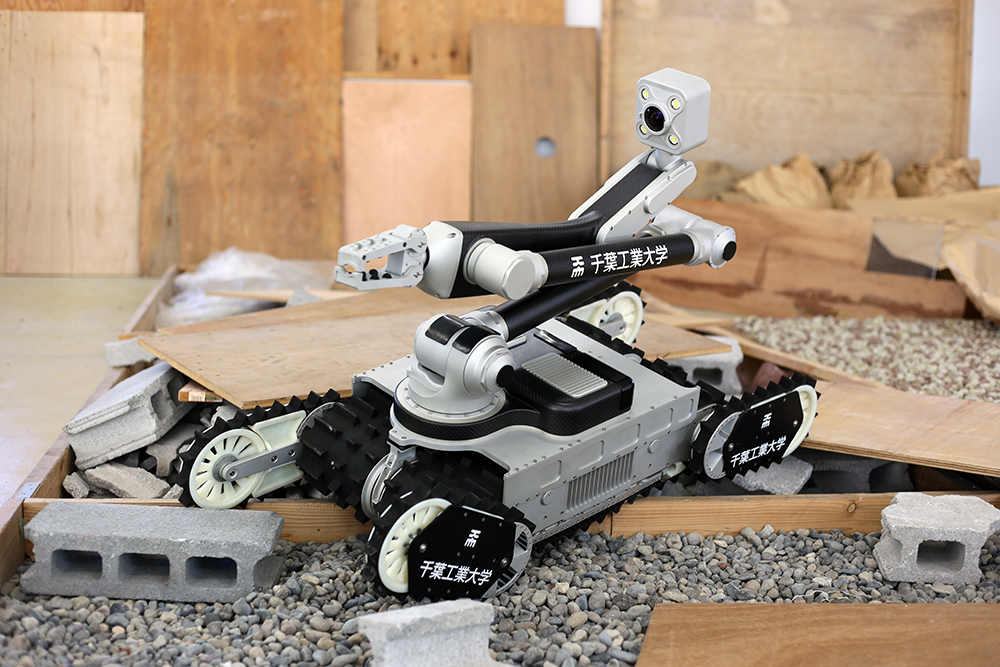 The Concept of SakuraⅡ development
“SakuraⅡ” is the most up-to-date robot designed to perform in some of the most extreme environments such as nuclear power plants, and It is exclusively developed by the Chiba Institute of Technology.

Chiba Institute of Technology developed Sakura Ⅱ based on the knowledge acquired from "Quince with modifications for operations at nuclear power plants”. Despite weighing only 47.5kg, SakuraⅡ is capable to deliver heavy loads up to 60kg and runs at 1.5km/h, ascend and descend stairs with inclinations up to 45 degrees, and features dust-proof and waterproof structures for the purpose of decontamination of its own body. With an optional robot arm on which a wide-angle camera can be mounted for recording of information at various heights and in confined spaces. SakuraⅡcan also handle light work tasks such as debris removal work and collecting samples using this arm.

The optional arm is excluded


Specifications of the optional arm


Press release:
The joint development of the first Japanese remote controlled mobile robot with explosion-proof function Contributing to safe and high efficient data collection and inspection for accidents in tunnels and petrochemical plants

Mitsubishi Heavy Industries, Ltd. (Headquarters: Minato-ku, Tokyo, President and CEO: Shunichi Miyanaga, hereinafter MHI) and Chiba Institute of Technology (Headquarters: Natashino, Chiba, Board Chairman: Osamu Setokuma, hereinafter CIT) jointly developed the remotely controlled mobile robot "Sakura II (explosion-proof)" that features significant reduction of risks of electrical spark or heat radiation, which in turn may cause explosions or fire where flammable gas may exist. This model is officially certified as explosion-proof, and it is the first wired or wireless remote-controlled mobile robot in Japan to have an official explosion-proof certificate. We will explore demands for execution of safe and highly efficient information collection, inspection and light duties at sites where explosion-proof functionality is required, such as accident scenes in tunnels and petrochemical plants.

Based on the robot “SakuraⅡ" which CIT has developed and used towards the restoration of the nuclear power plant accidents, MHI leveraged their technological comprehensive ability gained from their wide range of industrial expertise and realized a robot with high explosion-proof functionality. The robot is developed under the project that is commissioned and subsidized by "Project to develop systems to handle the social challenges of infrastructure maintenance management and renewal" *1 of New Energy and Industrial Technology Development Organization (NEDO) and passed the explosion-proof model inspection of the Technology Institution of Industrial Safety (TIIS) in Japan. Moreover, Explosion-Proof Certificate with the ATEX directive, which is widely adopted in Europe, will be acquired.

Explosion-proof mobile robots are expected to perform in various situations including methane gas spouts during excavation, and accidents in tunnels with a risk of ignition or explosion by a fuel leak from a vehicle. Industrial infrastructures such as oil refining plants, chemical plants and power plants built after the rise of high economic growth period in Japan are aging and the risk of damage to people and society is increasing. Therefore, the demand for anomaly detection and light works by robots is increasing in order to operate emergency inspection and rapid recovery in the event of a disaster. There is also a trend in new oil field facilities and in oil and chemical related facilities to adopt robots in carring out tasks such as inspections at high platforms and in confined spaces, where humans are difficult to reach, and to make those tasks low cost and high precision.

The joint development of SakuraⅡ (explosion-proof) is a start for MHI and CIT to cooperate on the development of an explosion-proof robot arm and auto-piloting robot, and to stimulate demands in various areas, expand these new applications, and explore potential demands.